This film is available for the run of the festival starting the day of Thanksgiving 2021. To watch or to vote for this film please click on the orange “TICKETS” button below and purchase a ticket for BLOCK 11.  You also have the option to buy the Movie Buff Pass to watch all the films of the festival until December 15, 2021.

A dreamy Tinder match. Two tango aficionados meet for the first time and it turns out to be a hell of a date! 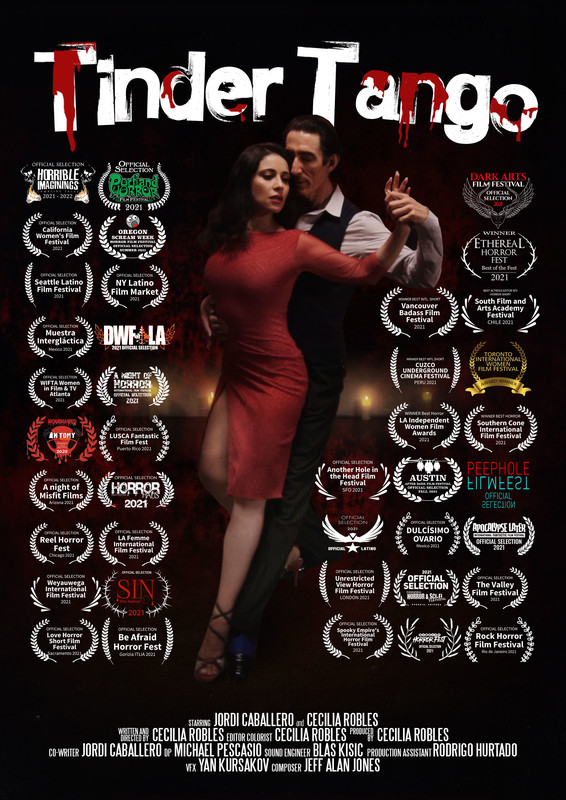 Cecilia Robles is an escapist. Her 3 passions are cinema, literature and traveling. After flying 3 years for Mexicana de Aviación and globetrotting around the 5 continents, she studied film, literature and acting in 5 different countries. She is fluent in 5 languages and has graduated from 5 universities (CUEC, SORBONNE, UMA, UCLA and IIN).

Her film ALTA EXPOSICIÓN, was granted the HBO US LATINO BEST SHORT FILM AWARD at the San Diego Latino Film Festival, and TINDER TANGO has been selected in 30 festivals in 6 months and won multiple international awards.

She also runs two YOUTUBE channels, one in Spanish and one in English about holistic health. ( Nutre tu templo and Nurture your temple)

This short combines 4 of my passions:

My aim was to make a very short, fast paced, and fun short that ended on a surprising reveal.

As a Mexican, I grew up reading masters of Magic Realism like Carlos Fuentes, Isabel Allende, and Cortázar, so everything I write is always sprinkled with a dose of fantasy…. and eroticism of course, because that’s right up my alley…

In terms of look, I made a great deal of effort in the color correction subject. I aimed to do a clear progression in color temperatures, going from realistic palettes, all the way up to deep greens and blues emulating Guillermo del Toro’s “The shape of Water”, and end up with very deep reds studying Coppola’s “Dracula”.

It was a labor of love for which I carefully planned every single detail from wardrobe, to choreography, to set design and shooting list.

I edited in a relatively short amount of time on FCPX, but it took me took me a long time to find the best SFX specialist that really understood and could execute my vision.

I finally found THE one, Ian Kursakov, based in Russia with whom I corresponded with via Skype during 3 months with a 12 hour difference. (3 am for me- 3 pm for him)

I am very pleased that Jordi Caballero, my partner in crime, accepted my offer despite being on tour with Andreas Bocelli!

Overall I had a fantastic team and I’m very grateful for their support.

A lot of happenstances occurred during the shooting, and those are juicy stories for Q & A s.