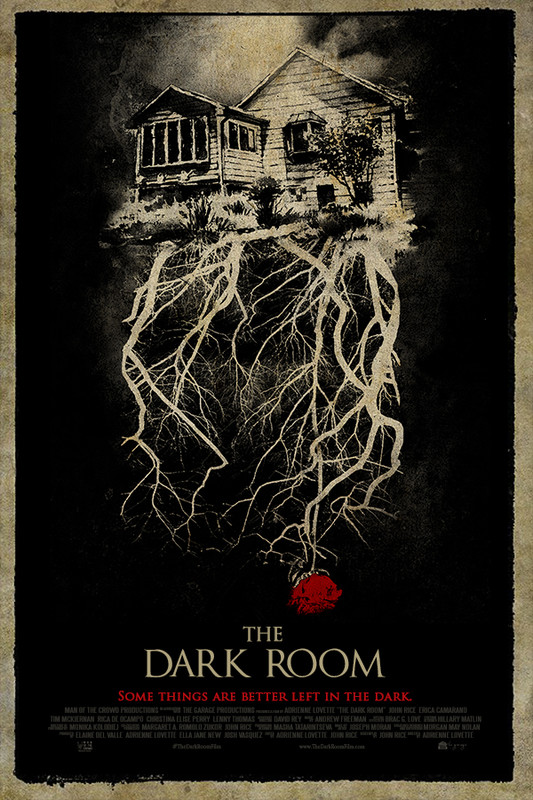 When adventurous strangers at a psychic party unexpectedly contact the spirit of a young murdered girl, they discover their host’s intentions are much darker than anyone first believed.

Adrienne Lovette is an award-winning Latinx New York-based director, actor, and writer. She was born in San Juan, Puerto Rico, and grew up in Orlando, Florida. Throughout her career, Adrienne recognized the lack of diversity and inclusiveness in film and created her own indie company called The Garage Productions, which focuses on people who are underrepresented. Since then, The Garage Productions has created several award-winning films and series, all of which tell stories of social change and showcase diversity, the LGBT community, and differently-abled people.

Most recently, Adrienne has been named a Women Directing Mentorship semifinalist by SeriesFest and Shonda Rhimes’ company, Shondaland! Adrienne wrote, produced, and starred in the award-winning feature film drama WHEN I’M WITH YOU, which premiered at Cinequest, won “Best Feature Film” at the Sacramento Film and Music Festival, and is now on Amazon Prime. Adrienne directed the award-winning short thriller HIDDEN DAYLIGHT, which won “Best Film” at Phoenix Comicon, “Best Short Film” at Freak Show Horror Film Festival, and earned her the title of “Women in Horror Honoree” at FEARnyc. HIDDEN DAYLIGHT is currently on DirecTV and Amazon Prime! She directed, co-wrote, and starred in a short romantic comedy BLIND DATE, which was nominated for “Best Screenplay” and “Best Short Film” at the New Classic Cinema Film Festival, and nominated for “Best Short Film” at the Kashish Mumbai International Queer Festival. BLIND DATE is now on DirecTV!

Finally, Adrienne directed the award-winning, female-driven comedic web series YOU’RE THE PEST, which can be seen on YouTube, won “Best Web Series” at Glowfest, and is currently screening at festivals. She co-directed the award-winning Latinx coming-of-age short drama THIS BOYS VIDA, which is being adapted as a web series, won “Best Trailer” at HollyWeb Festival, and is currently screening at festivals. She co-wrote, produced, and starred in the Instagram web series #INSOCIAL. At the moment, Adrienne is working on her sci-fi coming-of-age feature drama SEARCHING FOR L.G. WALTERS. For more information, visit her on IMDB, www.AnAdrienneLovetteFilm.com, www.AdrienneLovette.com and www.TheGarageProductions.com.

THE DARK ROOM began as a way to expand diversity in the horror/thriller genre with its ensemble cast, but over the years, it has grown to be so much more — an opportunity that an entire community could get behind! THE DARK ROOM tells a tale of revenge, loss, heartbreak, good and evil, and ultimately, what you would do for the love of your family. It’s a short concept for a feature film with the same title.

We filmed the short at the screenwriter John Rice’s childhood home. In 1948, his grandfather Andrew Nemchick built the farmhouse at 629 Bettis Road for his family to live in while he worked at a nearby steel mill. The house remained in his family until this year, when John’s parents found out that the government was forcing them out due to Eminent Domain and a highway coming through the area. When we heard the news, we knew we had to shoot the short film at his childhood home to commemorate the house and its memories. Shooting the film with an extreme amount of support from the entire surrounding community was special beyond words.

As a director, I had preconceived ideas of how I wanted to shoot THE DARK ROOM, but when I visited the house, its charm, history, and architecture proved that it was just as much of a character as the people in the film. The house guided me to shoot in ways I hadn’t planned and allowed me to take visual artistic risks to tell the story in the best way possible.

The color palette, lighting, wardrobe, and set design were modeled after the 90s horror films that John and I are huge fans of. We wanted to capture the fun feel of ensemble horrors like SCREAM or I KNOW WHAT YOU DID LAST SUMMER, and combine it with the sophistication of current popular horror films like THE CONJURING, THE BABADOOK, and HEREDITARY.

I directed THE DARK ROOM as I would a drama because the script lends itself to be directed as such. Each character has its own storyline, and I was always inspired by what the actors gave me. I believe that a good director not only sticks with their own vision, but also remains open to fresh ideas from the cinematographer, writer, producer, and even the actors to create a strong film. I had the pleasure of working with an exceptionally talented cast and crew with strong creative vision. I respect each and every one of them and took their suggestions to heart to create a well-rounded, engaging film. 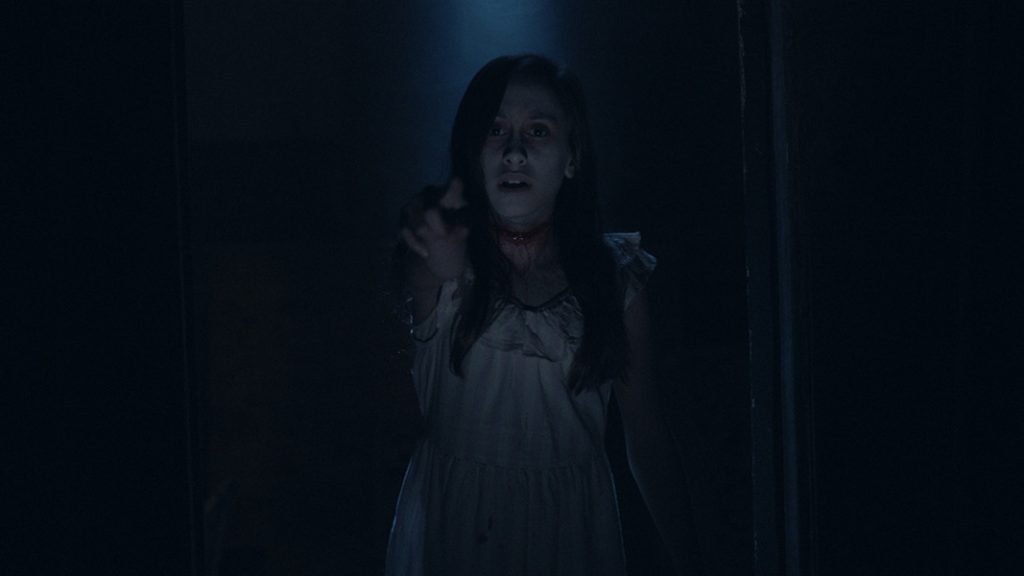 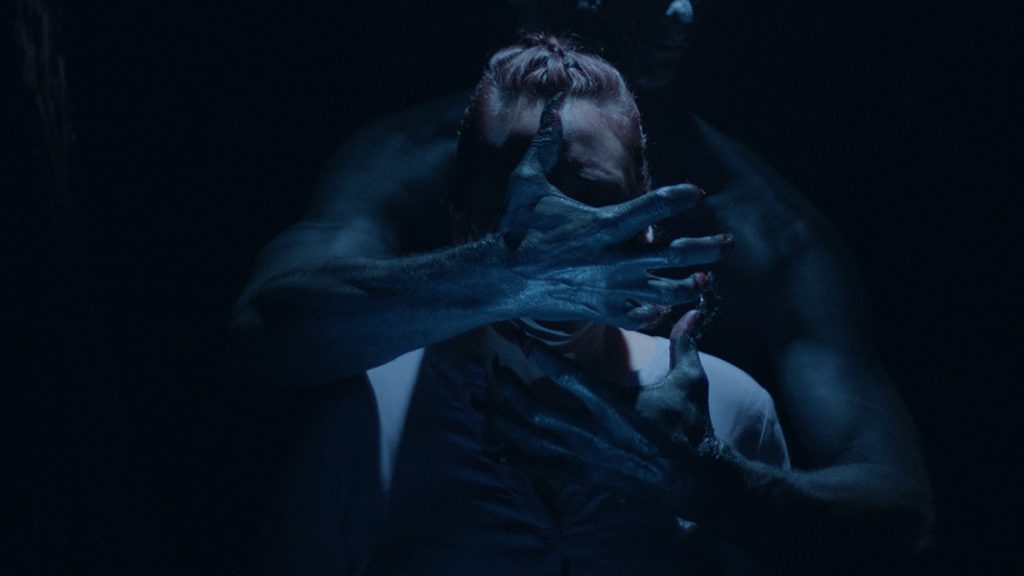 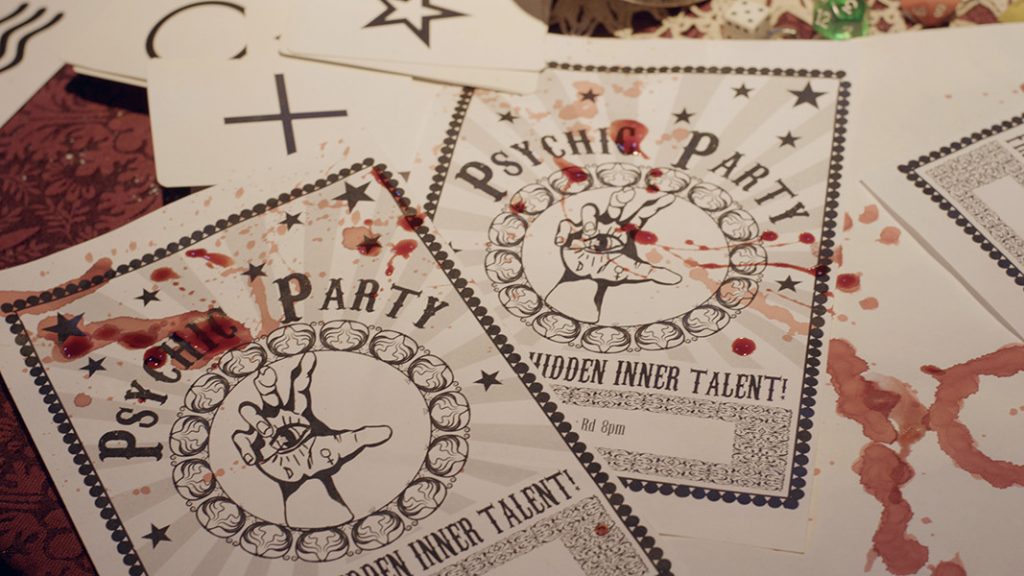 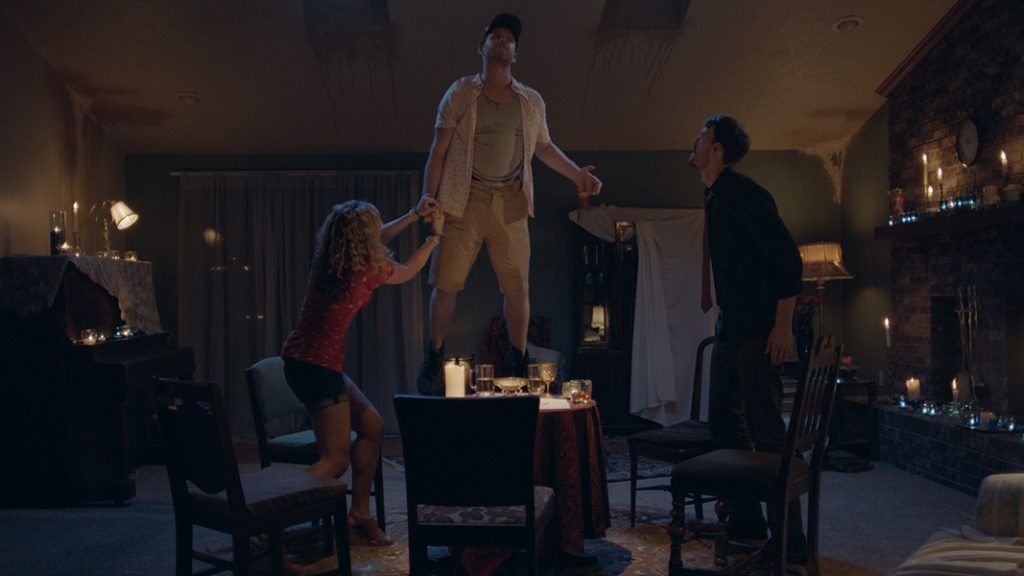 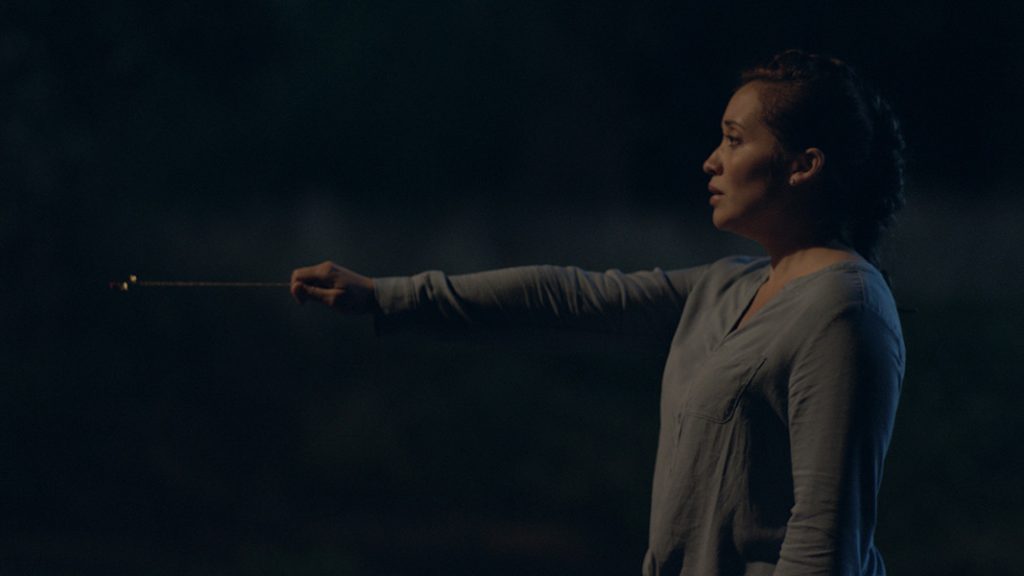 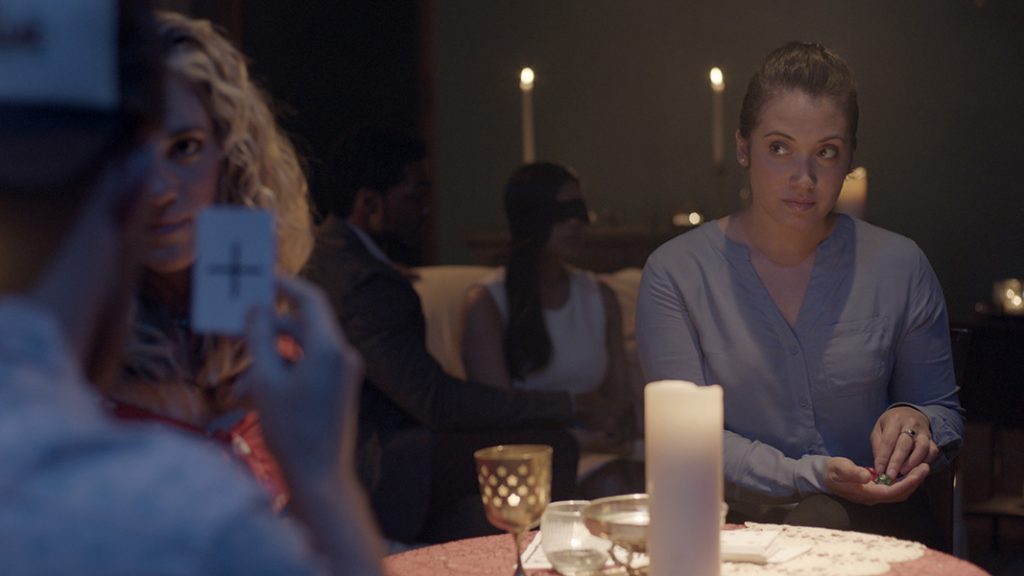 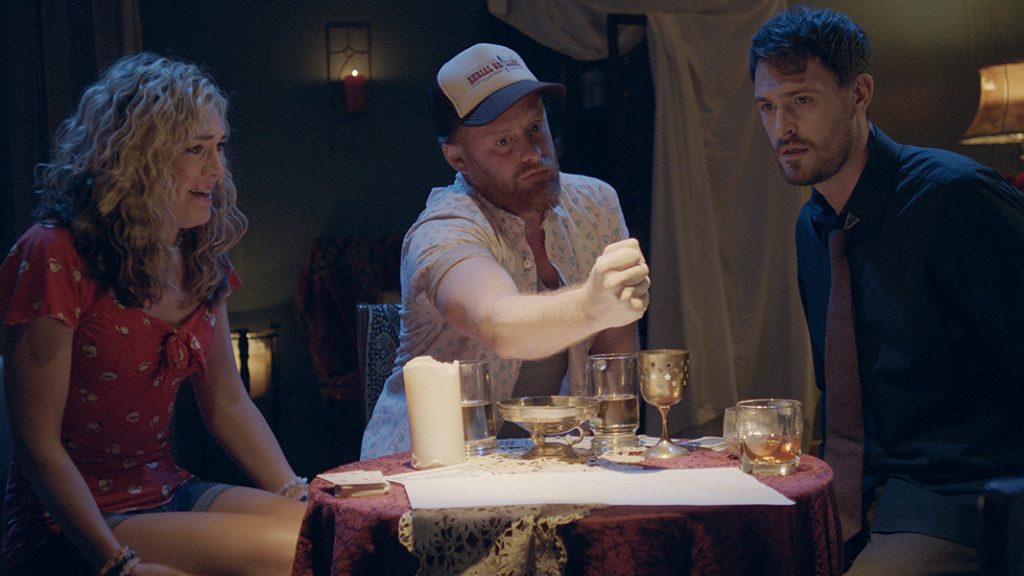 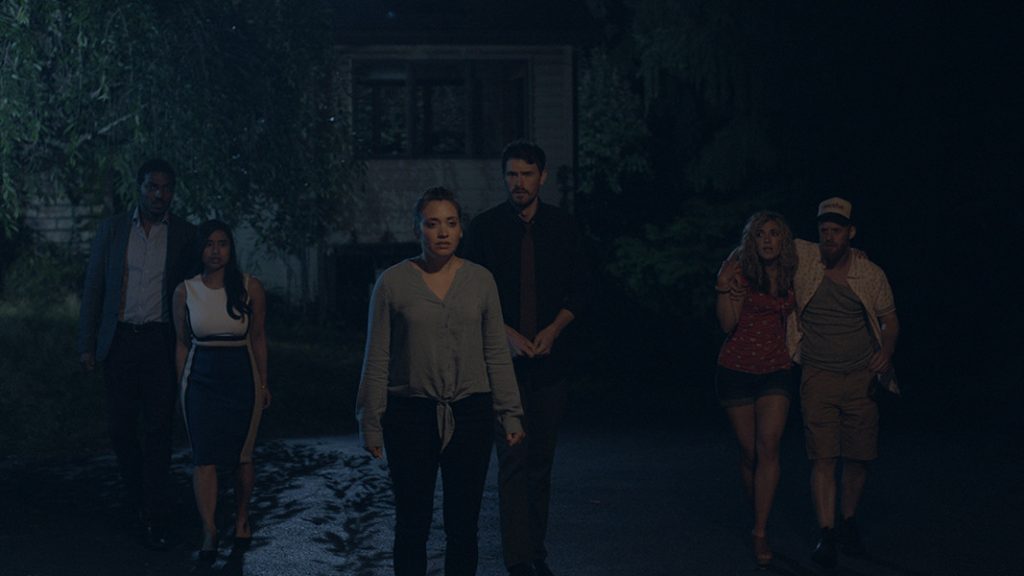 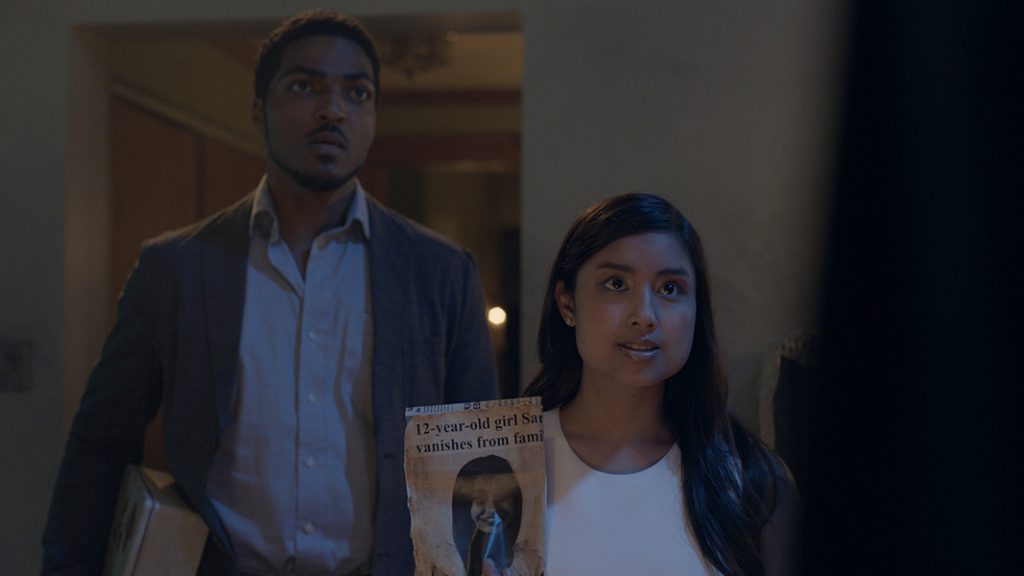