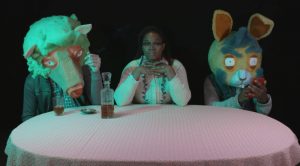 Moments is a surrealistic experience, a vision of being dropped into the world of someone’s dreams and nightmares. An equally funny and creepy story built on an enigmatic style of visuals with strange and unusual characters. Every scene is a picture that has its own bizarre aesthetic, pushing the boundaries of our daily paranoia. The video is an artistic exploration of human frustration, confronting the negative aspects of the ego which becomes the noisy background that disrupts our desire for our inner peace. 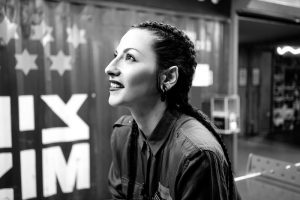 Zoe Map Films is a Brooklyn based production company founded by Italian film maker, Daniela “Zoe” Croci. Zoe’s vision is centered around capturing urban landscapes with a focus on documenting the human experience through the lens of ART, MUSIC & CULTURE.

ZOE graduated cum laude from The Academy of Fine Arts of Bologna majoring in Communication Design; her senior video thesis was entitled, Aerosol Art as a Space Revolution. Upon graduating she started to collaborate with many independent film production groups to make short films, and commercials. Her career pursuit as film maker brought her to New York City where she now lives and where she finished to edit her first short film Everything is as It Seems. This was her first time as director and this film was selected and screened at the New York Independent Film Festival in 2010. Since then, she has created many music video, fashion editorial videos, documentaries and commercials that she directed, filmed and edited. Since 2013, she has been the founder and the art director of EXIT ROOM an extraordinary gallery and cultural space project, that was located in the heart of Brooklyn. In 2014 she was the senior editor for the documentary Off-Identikit, a unique art project that includes interviews with major artists such as Kenny Sharf and Ann Magnuson. In 2016 she has assisted in directing, filming and editing the documentary DIGGING NY an amazing project that featured Ricky Powell and many talented musicians of the Golden Age of Europe and NY.