A short film on the environment and how the fossil fuel industry is affecting climate change. It’s a black and white hand drawn film dedicated to Standing Rock Sioux Tribe Dakota Territory. The main theme is about the Dakota Access Pipeline (DAPL). The intention of the film is to create social awareness regarding contamination of natural resources.

Michael Genz, is a Latino Professor teaching Animation at Edinboro University of Pennsylvania. He attended the California Institute of the Arts (Cal-Arts) where he was accepted in the School of Film and Video, majoring in Character Animation. He worked in the animation industry for fifteen years starting at Filmation Studios where he worked on HE-MAN and the MASTERS OF THE UNIVERSE and Shera the Princess of Power. In 1987, he went on to join the Walt Disney Feature Animation Company to work as an Assistant Animator, and Animator earning screen credits on Who Framed Roger Rabbit, Oliver Company, The Little Mermaid, The Rescuers Down Under, The Lion King, Pocahontas, Hercules, Mulan, and Tarzan. Mike also worked for Kroyer Animation Studios where he animated on Fern-Gully the Last Rain Forest, and Don Bluth/Sullivan Studios who created, An American Tail. He also worked for Disney Television as a character Layout artist and for Warner Brothers Classics that created the Michael Jordan/ MCI TV commercials. In 2005, Mike earned an MFA in studio arts from the Maine College of Art, in Portland, Maine, where he exhibited his thesis installation which included the work from the Perseus House, a treatment facility for at risk youth. In the spring of 2016, He took a sabbatical leave and was a visiting scholar at Woodbury University in Burbank, Ca.

I am a Latino educator/artist and citizen with concerns for our public health, safety and democratic rights. Our freedom to speak and peacefully resist to protect our constitutional rights to clean water, air, and land is being threatened as never before. For the past several years, I’ve been particularly concerned with the negative impacts unconventional drilling (fracking) has had and continues to have on our environment, our health, our economy, and our democracy. We have a government that doesn’t stand with the people it’s charged with protecting. We have legislators who are creating laws to keep innocent people from protesting the theft of land and resources by an out of control greedy industry. We also have people in power who deny the effects of climate change.
My film Mni Wiconi: Water is Life was inspired by the events of the Dakota Access Pipeline (DAPL) in North Dakota and the brave individuals who stood up to this adversarial industry, who persevered under some of the greatest trials in human history, and who brought these issues to the attention of the entire world. It is an animated film designed to raise awareness of issues raised by this resistance movement and is a fictional narrative that uses symbolic metaphors to represent economic greed, political and corporate bullying, and the destruction of the environment.
The pre-production process for the film did not begin with a conventional storyboard or sequence of panels like most narratives in film usually do. Instead it started as much more abstract with iconic imagery from the oil and gas industry based on my own interpretations of the things I’ve observed and learned from Marcellus and Utica shale unconventional drilling and related activities going on near my home in Pennsylvania. I wanted to convey a rough edge effect and style with grit.
Artistically, I was inspired by the work of William Kentrigde, Kathy Kollwitz, and the art from Oswiecim Malarstwo, a book of art created by Nazi war prisoners in Auschwitz. I studied Native American symbols, illustrations and consulted with elders of the Sioux territory to acquire cultural authenticity. The music was challenging to find that would be appropriate, but not ceremonial. Robbie Robertson’s piece was selected as it seemed to match the intent and hope for the healing of the land.
– Miguel Antonio Genz 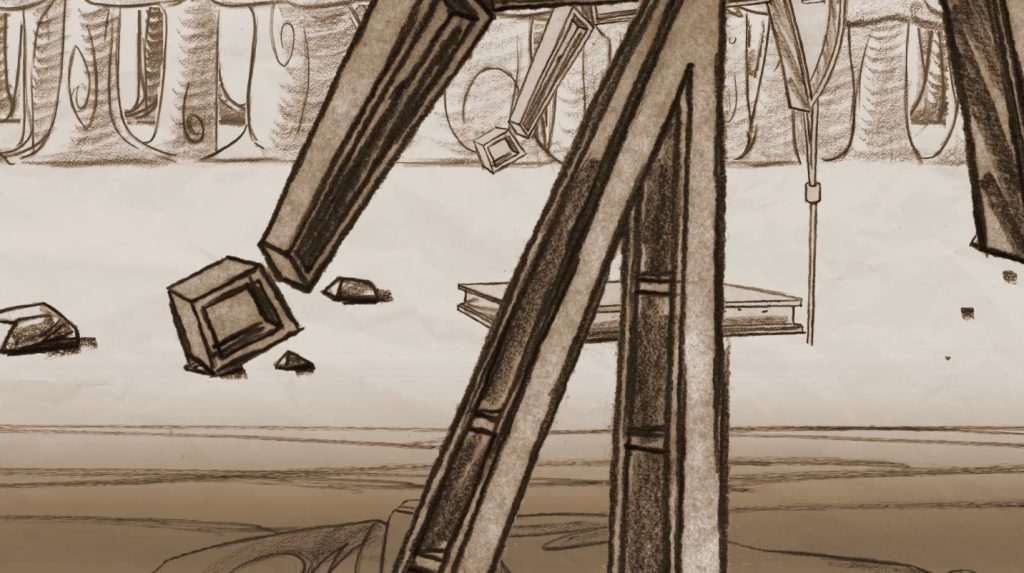 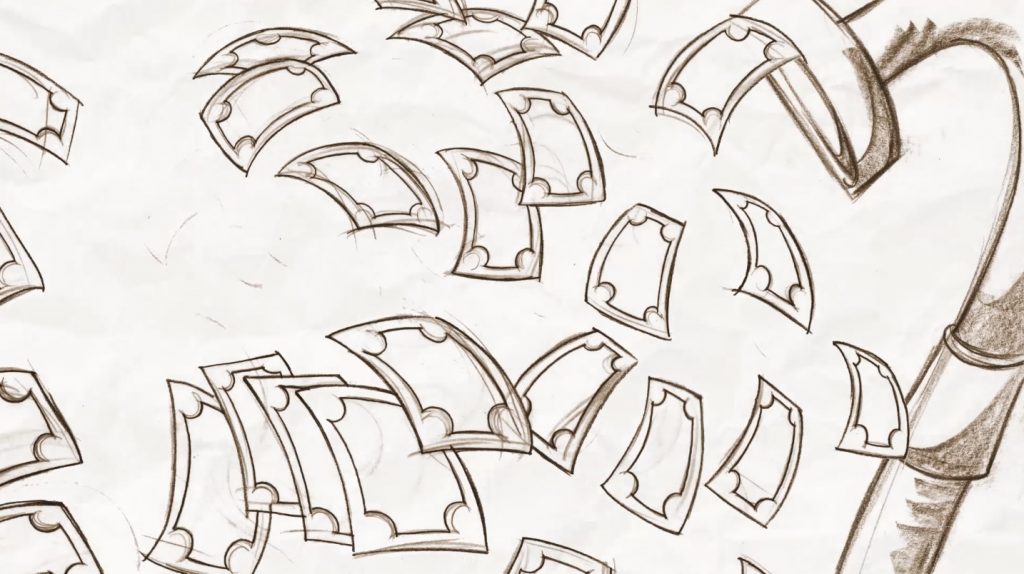 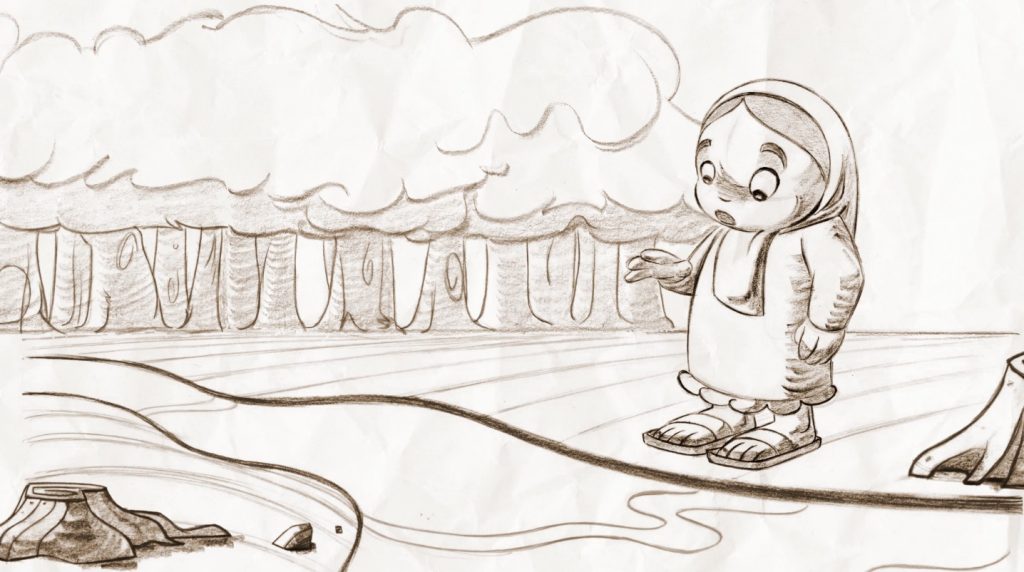 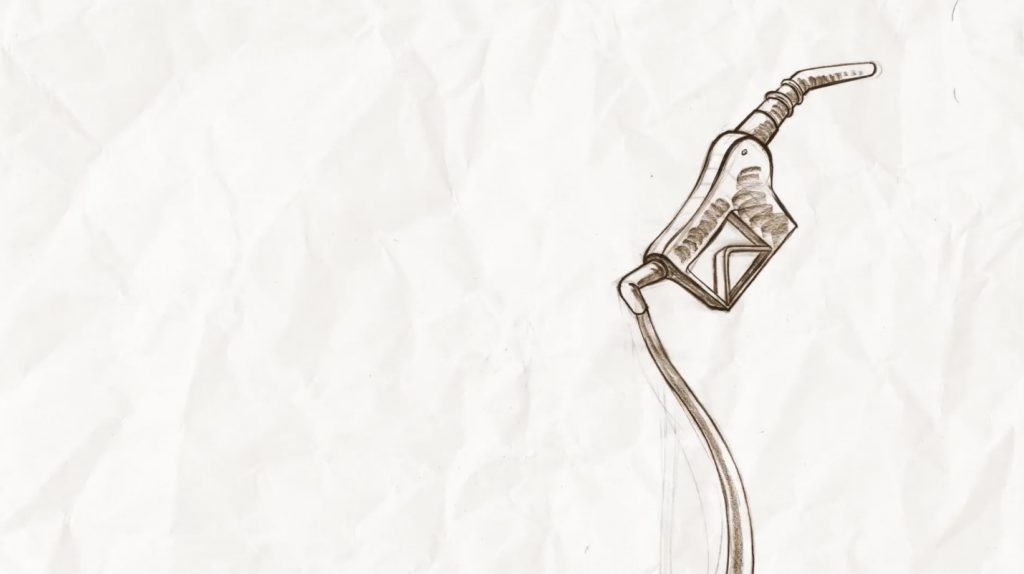 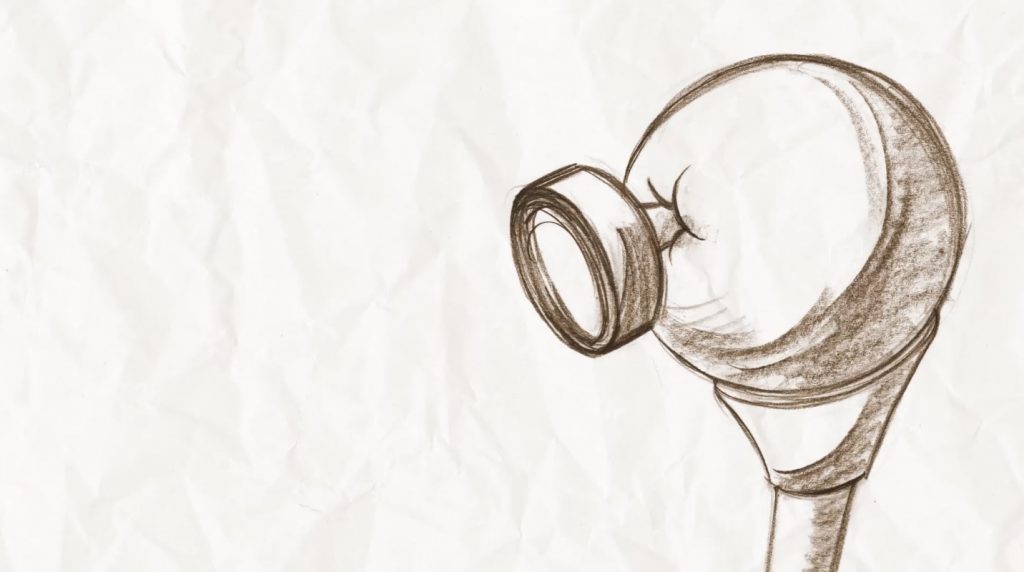 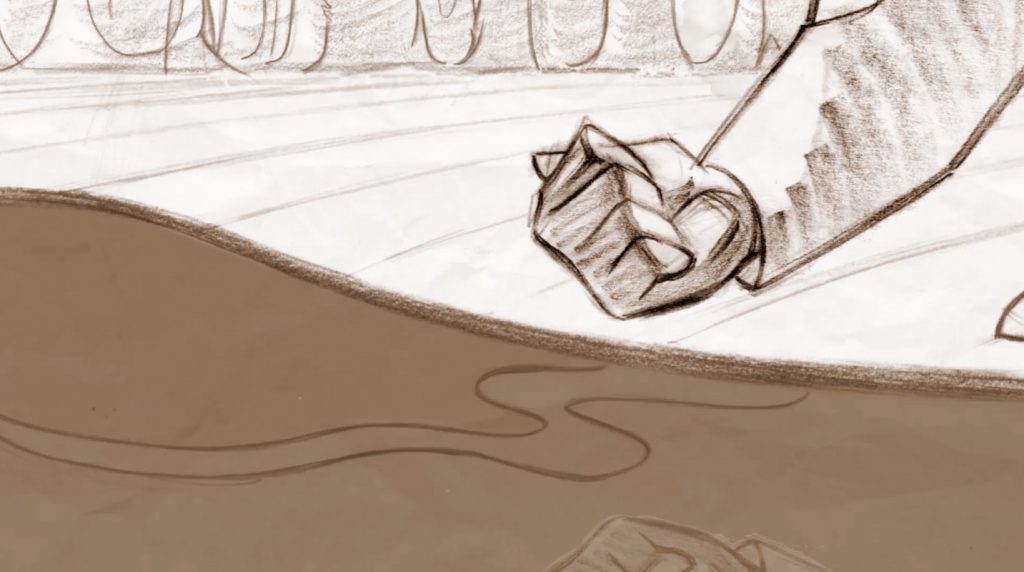