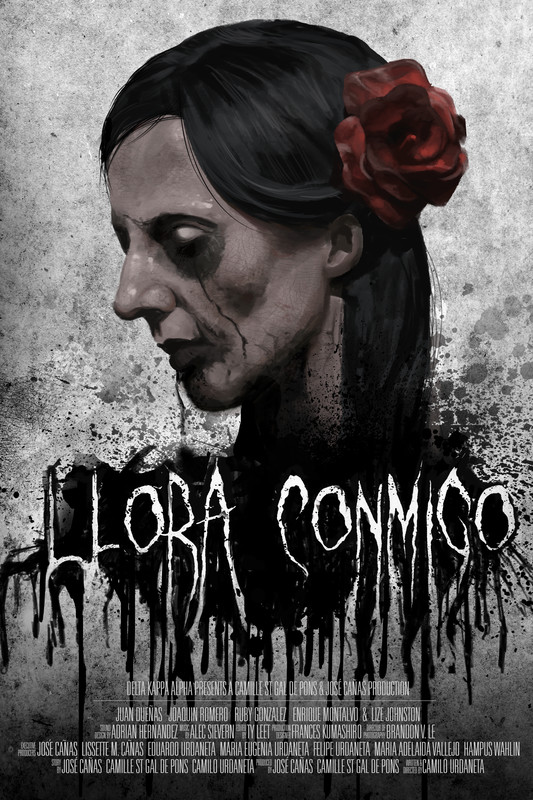 Llora Conmigo tells the story of a modern encounter with the Mexican folk legend, La Llorona. We follow Tomas and his younger brother, Simon, as they walk back from baseball practice. However, after hearing a mysterious woman’s cry, they feel the need to rush back home to their family for safety. That night, Tomas wakes up to find himself alone in his house with a familiar cry emanating from another room. As he ventures throughout his house to look for his missing brother, he finds his deepest and darkest fears realized. He is forced to try to escape La Llorona’s grasp before it’s too late.

Camilo Urdaneta was born and raised in Gainesville, Florida. He got struck by the filmmaking bug early on in high school after his English teacher let him start making videos as opposed to writing different assignments.

Camilo went on to attend USC’s School of Cinematic Arts, where he further developed his love of film and storytelling. While at USC, he got the opportunity to work on countless projects in numerous positions. Despite that, directing was always the thing that Camilo took to most and what he primarily focused on.

Professionally, Camilo got the opportunity to work at various production companies while at school. He has worked at Ghost House Pictures, Partizan Entertainment, Kree8 Productions and Charleville Films among others.

My journey with the short film Llora Conmigo began two years ago. However, my history with the character of La Llorona began much before that. I grew up in a Latin American family who did not shy away from sharing stories on the numerous monsters and creatures of the culture. The legend of La Llorona was the first story I was old enough to remember, and the first story to give me a nightmare. To me, her story is incredibly chilling and I always thought she deserved a place in American popular culture.

I set out to make this thought a reality. La Llorona has haunted my life ever since I was a little boy, and now was the time to share the scares with an audience. I passionately wrote down every single idea that came to mind in order to serve the story justice. It was then that I realized that I truthfully had nothing meaningful to say about the legend herself. I could not find a way to add anything new that has not already been said.

I decided to table the film idea and pursue other projects in the time being. Little did I know that this would prove to be the greatest blessing in disguise. In just a few short months, the tensions surrounding the current political situation on immigration in the United States exploded. Talks revolving around the US/Mexico border grew to a new level. Next thing I know Mexican families were being deported and separated in the process. Kids were being taken away from their parents without plans to reunite them. This news shocked me to my core. This was the same fear that the legend of La Llorona had haunted me with as a child, only now it was a reality for hundreds of families.

Llora Conmigo became that important story that I knew I had always felt it was. Suddenly, my passion not only for the horror genre, but also for this very relatable fear seemed like the right step for me to tackle as an artist. While this film isn’t overtly political, I felt that the most important thing was to deliver a film that not only represented the act of separating families in a way that was both engaging and terrifying for the film’s audience, but also represented a realistic and humanistic look at contemporary Mexican-American families.

I am more than honored to have made this film and that speaks to something I feel strongly about. I hope you enjoy the film and that it succeeds in entertaining you and haunting you as it did for me when I was a child growing up.