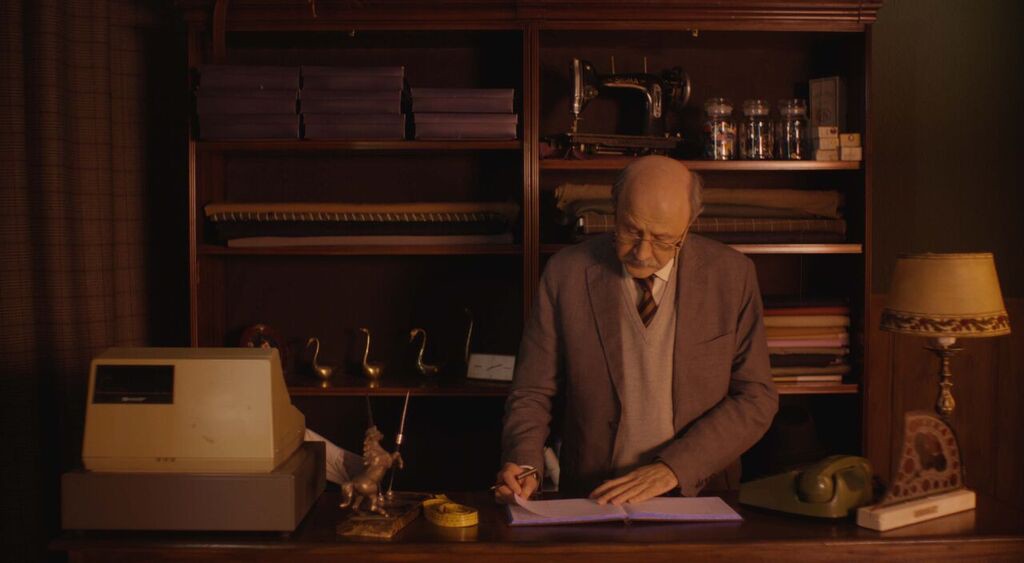 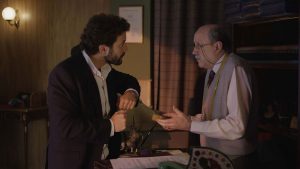 RAMÓN is a veteran tailor that has been elaborating gentlemen’s clothing for decades, but in recent years his tailor shop has become anachronistic and his profits scarcer. GERMÁN, the son of his longtime landlord and friend arrives one day, telling him that he is now in charge of the rent and that his contract won’t be renewed. Ramón now has a month to find solutions to his financial problems before Germán returns and throws him to the street. While young people don’t seem to appreciate Ramon’s craft, his long standing clients are dying one after the other. But it is among a young crowd that a solution to Ramon’s problems presents itself, although in a twisted and trendy way. 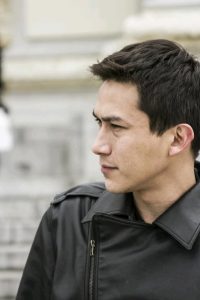 Arturo León Llerena is a Peruvian screenwriter and director currently based in Madrid, Spain. He started his studies in the University of Lima, first in journalism and later in audiovisual studies. As a journalist he wrote for local newspapers and news websites, and as a filmaker he worked on the set of TV series like “la muñeca del pueblo” and developed pilot episodes for sitcoms like “el abuelo fantasma”. Independently he shot video clips, short documentary such as “El ‘disípulo’ ” and small animation projects.

In the year 2011 León Llerena decides to deepen his audiovisual education and moves to Madrid where he studies a master in screenwriting at the Escuela TAI. During these studies his animation script “el héroe meado” gets selected as a finalist in various screenwriting contests. Once he obtained the master’s degree at TAI, he decides to study a master in production and directing at Escuela Cice, also in Madrid. After he finished his second master’s studies he released his first short film, “Amigo” (2014), about an ilegal inmigrant from Bangladesh that sells beer cans in the streest of Madrid. This short, still been distributed, has been selected in international festivals such as the San Francisco Inmigrant Film Festival (United States, 2014), Opuzen Film Festival (Croatia, 2014), Indian Cine Film Festival (India, 2015), among others.

In the year 2014 León Llerena becomes part of the writing team of peruvian tv series “Somos family” where he writes four episodes in the only season of the show. By 2016 he finalizes his second short film “Últimos días” (last days), about an old tailor that has to reinvent his business in order to survive. He currently developes television and film projects for peruvian production companies.

The writing process of “Últimos Días” started out of a personal sense of indignation because of some disdain towards certain activities that demand hard and meticulous work and not only spontaneous inspiration. As a screenwriter, there have been times when, after many hours of dedication in a script, someone from outside the process criticizes the material because it’s “too narrative”, as if that was something awful, and specially, without any artistic quality.

Explicitly writing about oneself is something that I find a bit awkward, so I started to search for a profession that in some ways I could parallel with mine and transport this indignation. During this time I walked a lot through the streets in Madrid and every day I saw more and more traditional businesses getting closed down, with “últimos días” (last days) and “liquidación total” (final liquidation) on their windows.

From those classical professions, some old as storytelling, the one that especially caught my attention was the tailor, a professional of elegance and fine crafts, but someone whose shops are less visited nowadays because most people buy their clothes, mass produced mostly, in department stores, while the younger fashions tend to have their own concepts of elegance.

It was within young people’s tendencies that I found something that I consider quite the opposite from the classic tailor’s craft: Vintage clothing. Sometimes damaged, maybe with fungus but with high prices and in great demand nowadays. To force a tailor within this contradiction was the next step in the writing process of “Últimos Días”. The generational differences, the clash between old and new kept growing in importance within this story’s themes.

As the screenwriting progressed, I diminished the indignation factor from the inception of the project because It was taking the story through some outrageous paths that damaged the sensibility of the main character and his struggle. Adopting a more serious tone, without eliminating some comedic elements, is what helped to outline Ramón as a more human and believable main character.
To achieve this, I wanted to avoid showing Ramón as a helpless victim. I think that we all can be victims and also victimizes at the same time. In Ramón’s case, I try to play with this when he puts whatever high price he deems convenient on the old clothes that his young clientele is willing to buy just so they are cool and fashionable. On the other hand, even if there are antagonistic forces that Ramón has to fight against, It was my intention not to create characters that were just plain evil. Neither the heir Germán nor the snob Leonora have evil as a motivation, and Ramón is not a saint either. They are all people who try to survive, each of them on their own way, in difficult times. Like us all.

Death and identity were other themes that I wanted to include in “Últimos Días”. Ramón is a widower, his longtime friends and clients are dying of age one after the other, and his profession is barely surviving. With his attempts to avoid the dead of his shop, his identity is distorted, resulting in some relative success that, on one hand almost buries his profession, and on the other has him talking used clothes from dead people. Ramón is a man that needs to retire but what he wants is to keep working and that brings him harsh consequences but also some knowledge of the modern world that one day invaded his space.

Although the ending may seem somewhat sour and give the impression that Ramón has lost, one of the intentions with “Últimos Días” is to pay tribute to people that, like Ramón, might be old enough to retire, but that want to keep on working because the love for their profession is what makes them feel alive.