When a young woman is brutally murdered in her apartment, 2 detectives are called in to assist at the crime scene. Believing it to be a routine killing, they are unprepared for what’s in store. 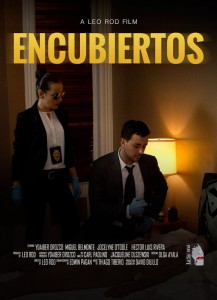 Director and producer Leo Rod discovered his love of horror films at a young age. Born in Caracas, Venezuela, Leo’s father introduced him to classic horror through the works of Terence Fisher’s Dracula (1966), Lucio Fulci’s Zombies (1979), and Fritz Kiersch’s Children of the Corn (1984). This penchant for the horror genre remained a hobby until Leo finished college and moved to the US.

After spending time in South Carolina, Leo followed his passion for photography to Florida where he enrolled in classes at Crealde School of Arts in Winter Park. There, Leo immersed himself in his love of capturing moments and people forever in photos. He spent considerable time in the darkroom watching the “magic” of his images appearing on seemingly blank paper.

Leo’s interest in film grew and, after moving to New York, he registered in the Filmmaking Continuing Studies program at NYU. While there, he began to recognize and master the connections between photography and filmmaking.

After completing several classes and film assignments, Leo decided to pursue independent filmmaking. In collaboration with Corey Snyder, a fellow NYU student, Leo produced the short films sHELL (2011) and Zombie Rocker (2010). Both were accepted and screened at different film festivals.

In 2011, Leo fully embraced his passion for creating horror films by creating La Sayona Productions LLC. He aims to create horror films in the vein of the “old school” ones he fell in love with as a child watching with his father. Leo cites the works of directors Rob Zombie, James Wan, Scott Derrickson, Federico Fellini, Stanley Kubrick, and William Friedkin as some of his favorites.