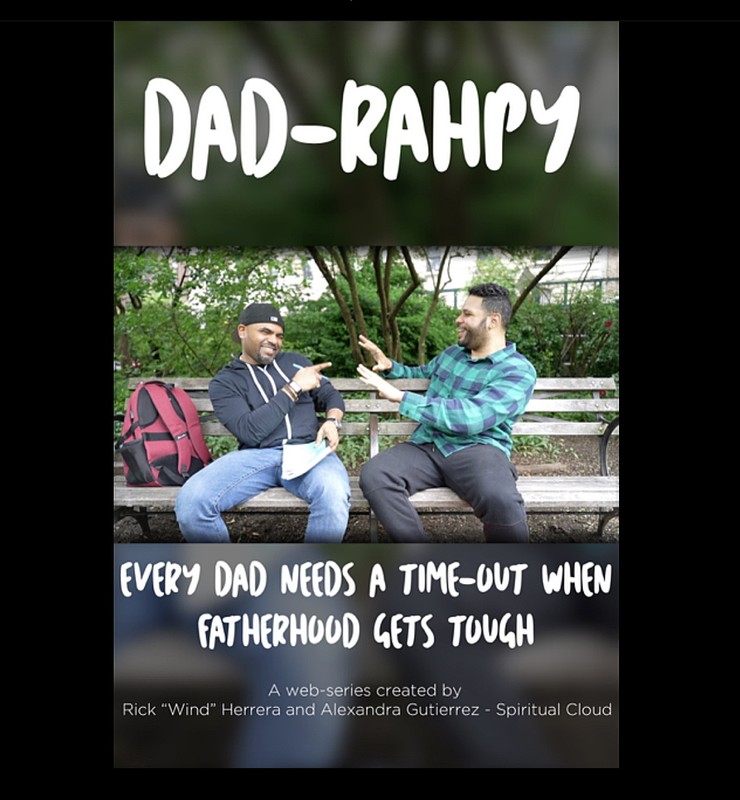 “DAD-rahpy” follows two Afro-Latino fathers who randomly met on a bench at a children’s park.
As they build a friendship they confront their internal conflicts, and the Joys of fatherhood while juggling the obstacles of life.

Rick wrote a poem dedicated to fathers; which allowed Jerry to open up about his relationship with his dad

Rick “Wind” Herrera is an award-winning and multi-talented artist. He is a Brooklyn native, comedian, writer, singer, and actor who is pursuing his passion of creating projects and performing. Despite growing up in Brownsville, Brooklyn, Rick has overcome challenges and setbacks by learning from his environment in a positive way.

In 2015, his one-man play, “The Naked Truth,” won the award at the 10th Annual One Festival. This is a prestigious festival that selects only one of 14 one-man plays to be showcased throughout New York City.He is also a 2017 “Brio” award winner which recognizes his work as an artist. Also in 2017 his show “The Naked Truth” was selected in the HBO Latino Film Festival.Rickʼs second one-man show, “Still Naked” premiered in 2017 at “LATEA Theater” and received rave reviews.

In 2018 he created and performed an intimate concert called “F.E.A.R” based on original music he wrote. That same year he received an award from the”American Filmatic” for his
performance in his one-man play “The Naked Truth”.
In 2019 Rick co-created and released a podcast with his wife called “The Wind & Cloud Podcast” which interviews all types of guests of different professions. Rick continues to spread positive messages, laughter and spirituality to the people he connects to on his journey and has plans to continue creating One-man plays.

Alexandra Gutierrez is an artist with multiple hats. Her background and training in dancing, singing, and acting has led her to play various roles in musicals, theater, independent feature/short films, commercials, and commercial print ads.
When not performing she continues to create content writing, producing and directing. Alexandra also goes by the name of Spiritual Cloud, her spiritual name. She is a writer and actor of the “The Unknown Webseries” directed and created by Guru Enlightment.
In 2019, Alexandra produced, co-created, and released “The Wind & Cloud Podcast” alongside her husband, interviewing people from all walks of life as they share their inspiring journeys.

Her goal as an artist is to express meaningful life experiences through her work. She will continue to create content that has a purpose and will offer positive lessons to people, motivate dialogue and open our minds not to what society wants us to be but who we are, have inside ourselves and are afraid to embrace or let go.