This film is available for the run of the festival starting the day of Thanksgiving 2021. To watch or to vote for this film please click on the orange “TICKETS” button below and purchase a ticket for BLOCK 14.  You also have the option to buy the Movie Buff Pass to watch all the films of the festival until December 15, 2021.

Along the scorching southern desert border in Arizona, it is estimated that only one out of every five missing migrants are ever found. This film is the story of one group of searchers, the Aguilas del Desierto, themselves largely immigrant Latinos. Once a month these volunteers—construction workers, gardeners, domestic laborers by trade—set out to recover missing loved ones referred to them by word of mouth, phone calls, or Facebook message.

Amidst rising political repression and cartel violence, as well as the eternal difficulties of travel in the Sonoran Desert, the Aguilas carry out their solemn task.

Kristy Guevara-Flanagan, Director, Producer, Writer. Kristy has been making documentary and experimental films for nearly two decades, starting with a 1999 experimental documentary about a blow-up doll (which screened at the Los Angeles County Museum of Art, among other venues). Her first feature-length film, Going on 13 (2009), covers four years in the lives of four adolescent girls; it premiered at Tribeca and was broadcast on PBS. Kristy also produced and directed several short films, including El Corrido de Cecilia Rios (1999), winner of the Golden Gate Award for Best Bay Area Short Documentary at the San Francisco International Film Festival, which chronicles the violent death of 15-year-old Cecilia Rios. It was an official selection of the Sundance Film Festival and subsequently broadcast on the Sundance Channel. Her feature, Wonder Women! The Untold Story of American Superheroines (2013), traces the evolution and legacy of the comic book hero Wonder Woman as a way to reflect on society’s anxieties about women’s liberation. The film garnered numerous awards, premiered at the South by Southwest Film Festival and was broadcast on the PBS series Independent Lens in 2013. Her recent short, What Happened to Her (2016) premiered at the Hot Docs Canadian Film Festival, where it received an honorable mention for best short. What Happened to Her and her in progress feature documentary, Body Parts, continues her exploration on the themes of gender and representation. Kristy’s work has been funded by ITVS, the Sundance Institute, the Tribeca Institute, Latino Public Broadcasting and California Humanities. Now an Associate Professor at UCLA, she has served on juries for several organizations including Sundance’s Documentary Grant, the International Documentary Association, ITVS, California Humanities, and the Peabody Awards.

Maite Zubiaurre, Co-Director, Producer, Writer. Maite Zubiaurre has a Ph.D. in Comparative Literature from Columbia University and is a Professor in the Humanities at UCLA. She holds a joint appointment in the Department of Germanic Languages and the Department of Spanish and Portuguese. Before joining UCLA, Maite Zubiaurre taught at UT Austin,UNAM (Mexico), ITAM (México), and USC. She is the author of numerous publications, among them, a book on the dialectics of space and gender in nineteenth century European and Latin American realist fiction; a book on cultures of the erotic in early twentieth-century Spain; a digital archive on early twentieth century sexuality in Spain and Europe; a co-authored book on urban humanities and new practices of reimagining the city; and a book on the cultural uses of contemporary waste, that reflects upon the nature of urban refuse and upon the archival practices of the personal objects migrants leave behind along the US-Mexico border. She is presently working on a co-authored monograph on cultural representations of migrant death at the US-Mexico border, and co-directing a research team working on a digital “thick” map of the US-Mexico borderlands. She is co-PI and core faculty of the Mellon Urban Humanities Initiative, where she teaches border studies and Mexican popular culture, and also co-PI of the 2020-2021 Sawyer Seminar on “Sanctuary Spaces: Reworlding Humanism.” Maite Zubiaurre is also a visual artist and collagist: under the name of Filomena Cruz she has initiated a number of artistic interventions, among them her longstanding Venice, CA installation “The Wall that Gives/El muro que da.”

My scholarly work on border art, migration, and forensics led me to Aguilas del Desierto and their humanitarian mission. The Aguilas are Latino immigrants of humble means who at least once a month travel in their “trocas” [pickup trucks] from San Diego, CA, to the Arizonan desert, and search on foot for the remains of missing migrants. I joined Aguilas del Desierto three years ago, and have since then had the privilege to witness how their selfless devotion brings peace of mind to grieving families in Mexico and Central America. The desert is a vast cemetery where the fresh bodies and dried bones of migrants lie exposed under the merciless sun. By venturing deep into the wilderness of the borderlands and searching for the remains of missing migrants, Aguilas del Desierto lay bare the tragic reality of migrant death. And it is the enormity and injustice of this widespread though barely acknowledged tragedy along the border that compelled me to go beyond scholarly writing: In search for a more efficient tool able to raise awareness about migrant death and also highlight the heroic humanitarian work of Aguilas del Desierto, I approached Kristy, my colleague at UCLA, and that is how our documentary was born.
––Maite Zubiaurre

When my colleague Maite first described her work with the Aguilas del Desierto I was immediately captured by the Sisyphean task of toiling against the enormity of the border crisis. Who are these people so committed to such thankless work? I gathered a small crew and set out with Maite to join them just a few days before Christmas. We met the Aguilas pre-dawn at a lonesome gas station in the small town of Gila Bend. After driving all night from their homes in Southern California and sleeping in their cars, the Aguilas welcomed us to the group and discussed their routes for the day.

As we headed toward our search destination, our caravan grew: Mexican and Dutch journalists arrived to walk with the organization; college-student volunteers that had heard about them from their Facebook page joined; a canine rescue unit coming back from fire sweeps in Northern California accompanied the group for the first time. The Aguilas, accepting of young and old, veterans and newbies, cannot keep up with the requests for missing migrants.

We ended up filming two searches, one in a temperate November and the other in a lethally hot July. Each time the pace is rigorous. The desert appears flat, but cholla, rocks and surprisingly wide ant hills make for difficult terrain. It is hard to keep up and as a film crew, we lost each other many times, camera and sound completely out of sync. At the end of each day, we gathered together and made camp. We ventured out into the desert again the next morning to squeeze in a few more search hours before everyone heads back home, many to work early Monday morning. As arduous as it all is, the Aguilas remain focused on the travails of the migrants themselves, hopeful to reunite families with their lost ones.
––Kristy Guevara-Flanagan 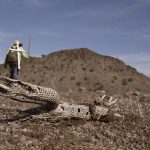 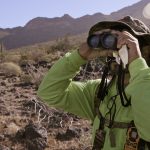 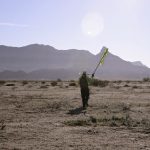 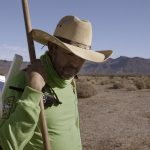 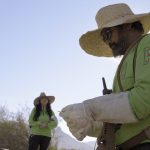 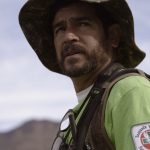