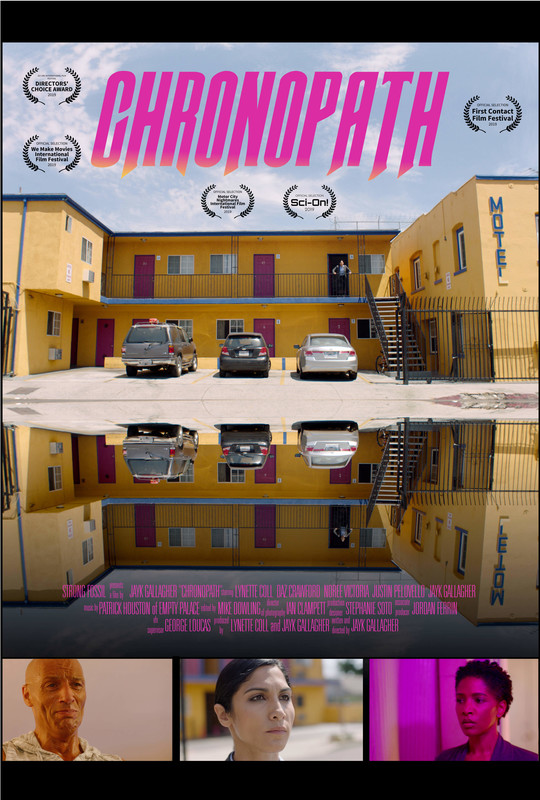 ‘To protect a mother and son fleeing a murderous husband in a polluted future LA, Detective Inés Nieblas must use the ability to alter past events.’

In a polluted near-future, Inés Nieblas is a new kind of LAPD Detective called a Chronopath; she has the power to change the outcome of a murder within the first 24 hours after it takes place. She places her hand over the fingerprints of the victim, and, only once, can go back in time as that victim and attempt to alter the past. When Mae Conrad and her son Taj are violently slain by Mae’s abusive husband Dennis, Inés must use her powers to try to set things right. 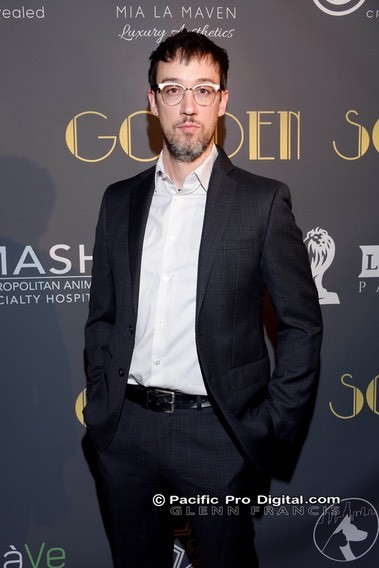 Finalist for the 2018 Sundance Screenwriters Lab and Sundance Sloan Commissioning Grant, Jayk Gallagher graduated Emerson College 2004 and moved to L.A. where he wrote, produced and directed episodic series for Fremantle Media, Current TV, and Sun Microsystems, plus music videos called “a kick to the gut” by SPIN Magazine, and “breathtaking” by The Huffington Post, among other national press praise.

In 2016, Jayk wrote and produced the magical realism short film “Synching” which starred Milana Vayntrub (This Is Us, Silicon Valley, Love, AT&T’s “Lily”), Lauren Flans (Wild N Out, Another Period), Laurie Kirkpatrick (Conan O’Brien), Adam Gifford (Longmire, Wristcutters: A Love Story), Dan Bell (Wayne’s World I & II) etc.. Jayk also directed and produced a music video for the song “Precious Gold” by Beca, which dropped March 2017, and has been praised by such outlets as Stereogum, Flaunt Magazine, Lucky Magazine, and many others.

Jayk is a produced playwright, a published poet, and a prolific screenwriter. He workshopped several plays with Brimmer Street Theater Company in LA, that would later inspire the screenplays “Synching” and “The Apprehension Of Dr. Kaczysnki”, a finalist in last year’s lab. Gallagher writes reviews for multiple travel websites, press releases for the theater, film and music industries, and has 14 years experience tutoring SAT English and Grammar. As an actor, he trained at North Carolina School of the Arts, Boston University Theater Institute, and El Galliner in Girona, Spain. Jayk has performed stand-up comedy regularly at The Comedy Store, The Improv Hollywood, The Ha Ha Comedy Club etc.

Jayk recently played the role of “John Corbin” on HBO’s Emmy award winning “Veep”, but he’s best known for his role in the film “The Social Network”. He also appeared in the Coen Brothers’ “Hail Cesar!” as well as on CBS, TNT, MTV, ABC Family, Comedy Central, E!, The Disney Channel, and other networks in shows like CSI: NY, SouthLAnd, Crash and Bernstein and many others. He stars as Brandon Dedd in the feature “Dedd Brothers” now available on Amazon and Netflix. 2018 further saw him as “Handsome” in the upcoming feature “Western Wonderland” written and directed by Sundance alum Reza Safai, and in promos for Jack Reacher 2 directed by Head of Worldwide Creative Content at Paramount, Marcus Perry. Jayk has appeared in over 45 national commercials. imdb.me/jayk

We live in a time in which presidents, celebrities, and many in society feel that publically grading women’s looks and sexually assaulting women are appropriate actions. This unsafe climate contributes to the fact that one in three women will experience a physical attack from a significant other in their lifetimes. Three women are murdered by their intimate partners every day. This is a status quo that must be drastically altered immediately. It is our hope that the vivid, brutal imagery and storyline of “Chronopath”, presented by a group of individuals who have first-hand experience with violent abuse, can become a unique voice added to a chorus for change.

“Chronopath” is a gritty sci-fi noir thriller in which, using her power to change past events, LAPD Detective Inés Nieblas attempts to protect Mae Conrad and her son Taj from Mae’s murderous husband Dennis. In a polluted near-future, Inés is a new type of policewoman with the ability to change the outcome of a murder within the first 24 hours after it happens. She places her hand over the fingerprints of the victim, and, only once, can go back in time as that victim and attempt to alter the past.

In nearly every sci fi or action film the protagonist is either Caucasian or male. When I saw my friend Effie Brown (Dear White People, Real Women Have Curves) take the Trailblazer Award at the Audience Award Film Festival in LA this past year she spoke about wanting to see a sci fi film with a woman of color as the lead. I immediately brought my film to her attention, and she began consulting on the production. Since then, other luminaries have brought their advice and skills to the effort. Reza Safai (Circumstance, A Girl Walks Home At Night, The Persian Connection) has also consulted on the gestation of the project, and George Loucas (Burning Sands, Beatriz at Dinner) and his company Baked FX committed to do all the VFX on the film. Associate Sundance Features Programmer Aprl Wright, and Head of Worldwide Creative Content at Paramount Marcus Perry have both offered advice and counsel on the film. When the Breakdown was posted, well-credited actors immediately emerged with strong interest in the project, although we ultimately settled on Daz Crawford (Thor, 007, Agents of Shield) and Noree Victoria (American Crime Story) as our other two leads, Dennis and Mae Conrad respectively.

Unlike past short film projects I have created, I’ve had folks, based on the content of the script and the power of the message, volunteer to contribute their money and time to move the film forward. I find this experience incredibly humbling and edifying, particularly because the plot for this short film came to me fully-formed in a dream. As the project has come to fruition, others whose life backgrounds resonate with the script have organically joined the team. Lynette Coll, a producer on the film, and the actor who portrays the protagonist Inés, was moved based on her own experience— she was kidnapped and raped by a group of men in NYC. She wanted to inhabit this story of female empowerment, as she felt it spoke to her very core, and needed to be told. Our child actor, Justin Pelovello, shared at the callbacks that he had recently come from the foster system to his current family. Before that change, he had witnessed his birth parents violently fighting in a motel room similar to the one in our script. Our co-lead Noree Victoria, who plays Mae Conrad, saw her own parents shot in front of her in a home invasion, similar to events in our film. I, myself, was raised by a physically abusive father, and many others on our set connected viscerally with the material due to similar experiences. It was as if this team was meant to coalesce around a thrilling story which each of us felt spoke for us personally, and allowed us to speak for still others.

“Chronopath” could serve as the cold open to the pilot episode of a TV series, or it could be the opening moments of a feature. The episodic and the feature versions are already written, and feature painful, relentless, yet innovative twists and turns, plus ingenuity, dignity and strength from diverse female protagonists. A Sundance debut for the short film could lead to the creation of a film that does what Wonder Woman, Captain Marvel, and Black Panther, excellent films created at a level at which I can only dream of telling stories, don’t do. Namely, result in a feature in which a diverse female lead, in our case a Latina descended from the indigenous Zapotec people of central Mexico, protects others in a polluted, harsh world more reminiscent of the original Blade Runner or Right At Your Door than any current blockbuster.

After watching “Alive In Jo-Berg” with my South African DP Ian Clampett, I knew I wanted to implement low budget VFX in a dank, grey future. Our female protagonist needed to have the toughness yet vulnerability of Ripley in James Cameron’s sequel Aliens, and I wanted the colors to be highly contrasting and saturated, with a dismal, metallic edge, like in the Tech Noir scene of the original Terminator. I wanted a beautiful pallette to appear on the skin of people of color, as I had admired in HBO’s Insecure, and seen truly culminate in the opening third of Moonlight. I wanted to see Downtown Los Angeles in all its looming sheen, as I had seen in movies like Collateral and Drive. And I wanted the upsetting sci fi tale to have a retro soundtrack, the likes of It Follows or Stranger Things. I am deeply grateful that all of these goals have been realized, the latter by L.A.’s own epic rock band Empty Palace; their lead musician Patrick Houston scored the film using a vintage analog synth.

The statistics in the opening paragraph were provided by National Organization for Woman as well as Project Sanctuary. A portion of proceeds, if any are derived from this film, will be donated to these organizations, as change is an absolute necessity— Both in the danger women face on a daily basis in what should be one of the safest countries in the world, and in the quantity of protagonists who are strong women of color in modern film. Ultimately, “Chronopath” is a fun, gripping piece of sci-fi entertainment that will pass in a blink, but we hope with the subjects it addresses and the combined stories of our cast, crew, and script, it will leave an imprint that will serve the community as well. 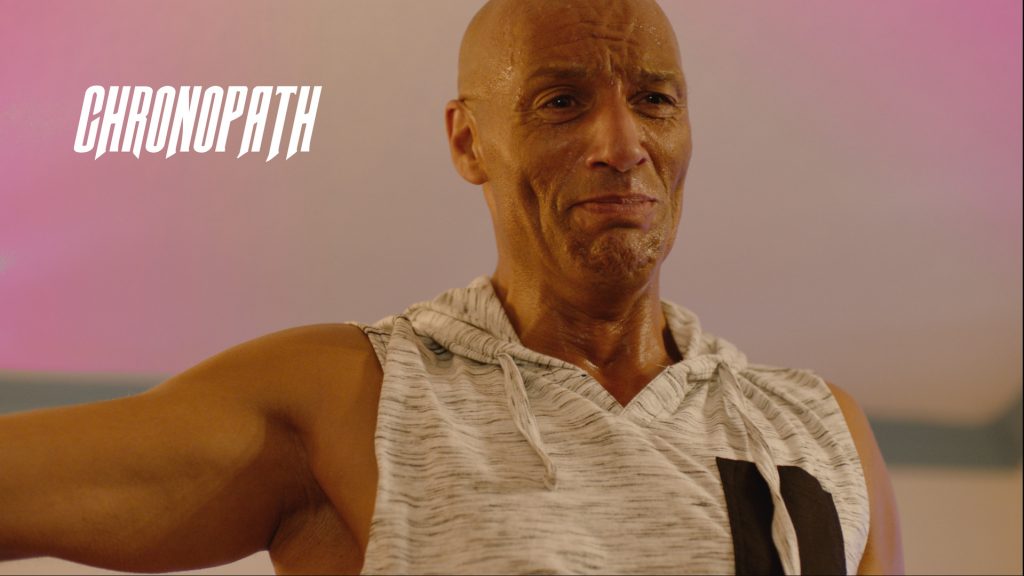 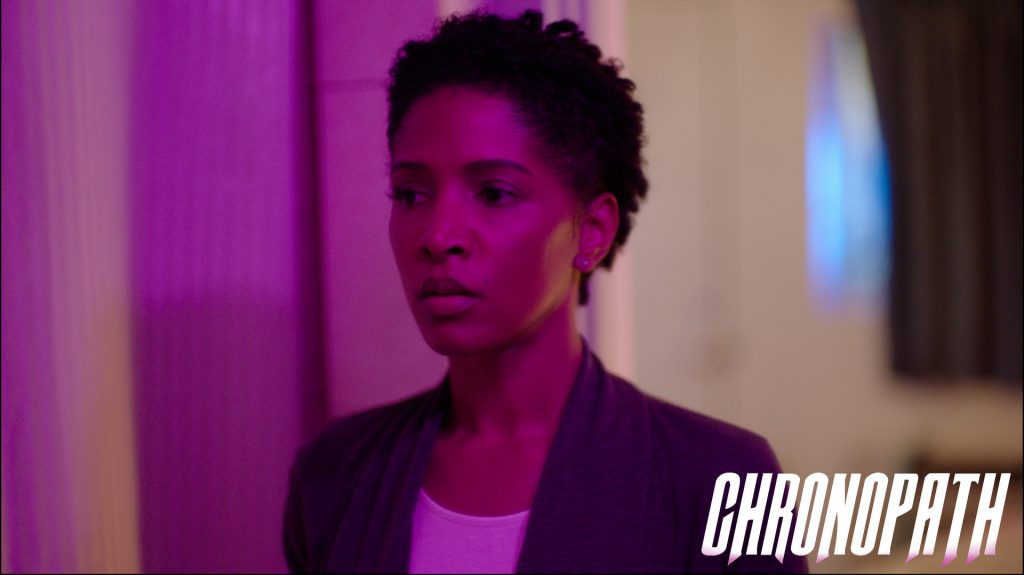 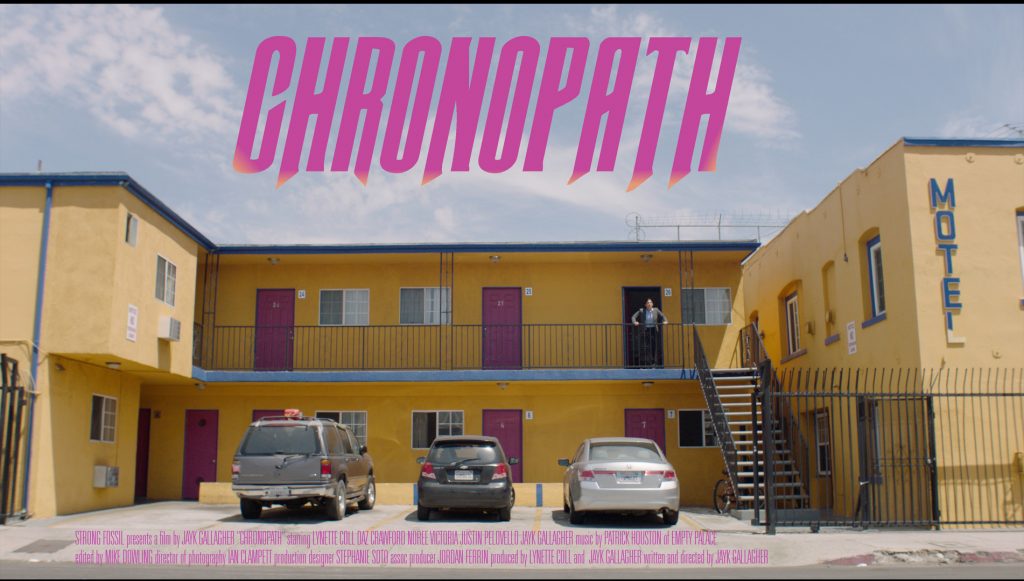 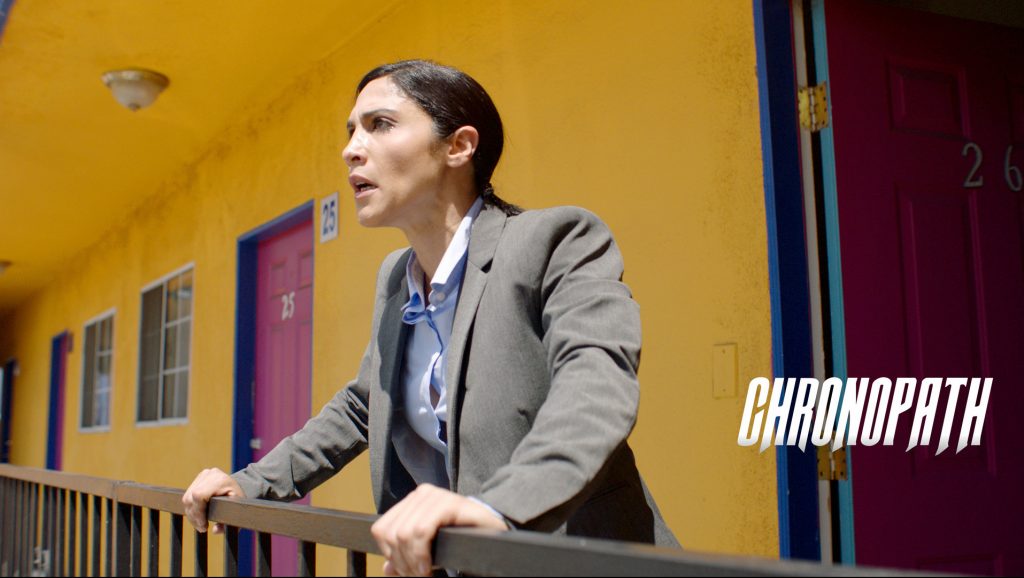 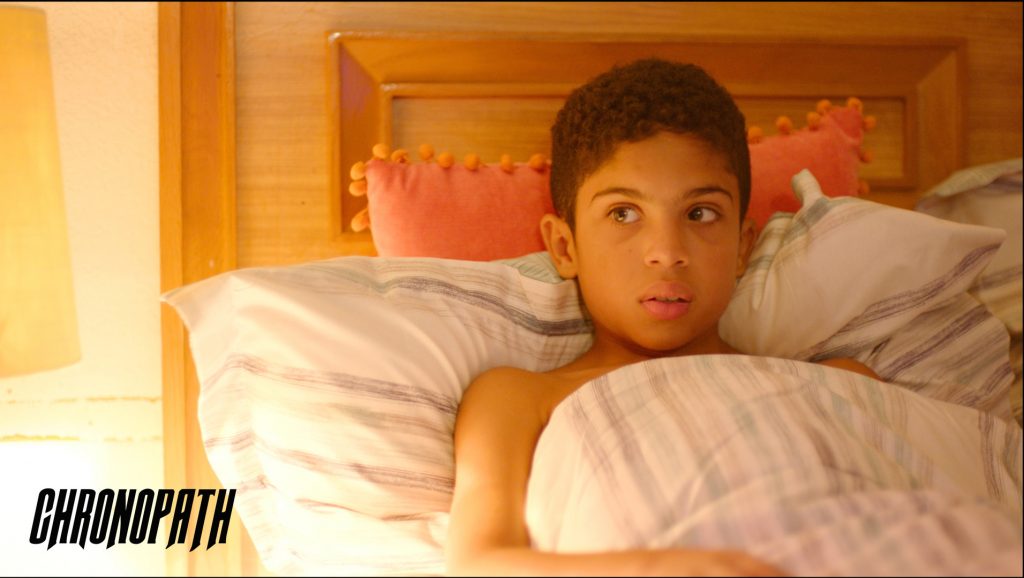 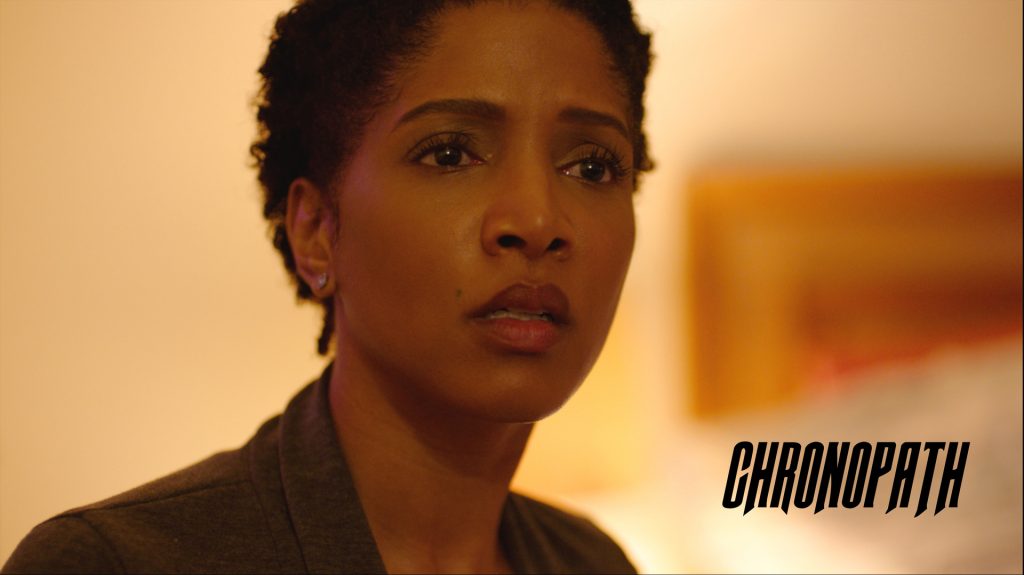